A Glimpse Inside a Hidden World 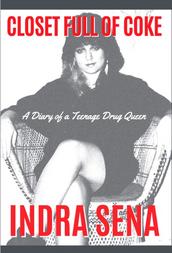 When I wrote my first book I had publishers interested. But there was one small problem: the ending. They wanted me to change it before publishing. But this is a true story, life had already written the ending.

Closet Full of Coke is about my teenage years as a fortune-hunting, glamour-addicted waif. In the twisted tale, I create massive destruction for others and myself. Despite the non-fairy-tale ending the story is addictively salacious and a racy read.

I’m not a therapist, spiritual guru, or life coach. I wrote a memoir because I’m a storyteller and my life as a teenager was bizarre. I spent years writing the surreal tale. My story is true but my book flows like a novel. I followed a traditional fiction structure because novels are fun to read and by chance my life eerily imitated art.

I let my teenager narrate, she told the story she lived. I added nothing. But my lack of reflection is at odds with the current template for memoirs. Apparently, memoir writers must be shining examples of right. They must be courageous, inspirational, and evolved. They must teach and guide. And memoirs themselves must end on a happy note, like fairytales.

I compare my books to Film Noir, where there are no heroes and people cringe while helplessly watching characters slip down the rabbit hole towards their inevitable demise, driven by an unending series of bad choices.

So I published it myself and started Noir Books. Now it has a true ending instead of an ending that “tests” with marketing.

Memoir Noir. It is a genre for those stories without the Hollywood ending, for people whose memoirs end in tears, not kisses.